Actual news to actually announce: The third edition of Common Errors in English Usage is now available to pre-order 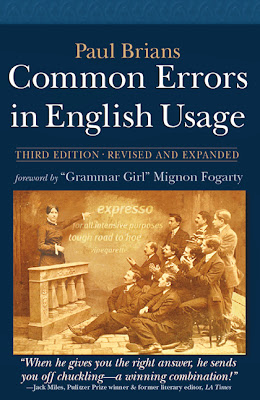 There is no end of excitement here at William, James & Company as we review the final proofs for the new edition of Common Errors in English Usage, which we will begin shipping October 21, 2013. It has been more than four years since the second edition came out, and in that time there have been many additions and revisions to the Web site that have not yet appeared in print. The third edition has been revised and expanded by 20 percent.

We've raised the price by a dollar for this new edition—$19, up from $18—but if you order the book using the coupon code FIFTEEN, you can buy it at the introductory price of $15 through the end of 2013. As always, we offer free shipping within the US.

And for a limited time only, while supplies last, you can still order the second edition of this book for the low, low price of $12. And even at that bargain-basement price, you still get free shipping within the US!

And for being a reader of this blog and surviving the advertising clichés in that previous paragraph, I leave you with a relevant sample entry that is new to the third edition:


blog/post
Ships used to chart their progress by heaving overboard a chunk of wood (the “log”) trailing a line and measuring how much of it unspooled in a given length of time. This allowed them to record the rate of the ship’s progress through the water. The resulting figures were recorded in a “log-book,” which was later abbreviated to “log.” The word’s meaning shifted from the device floating in the water to the book in which progress was recorded. “Log” also became a verb, referring to the process of making entries in a log-book. In modern times the word drifted away from seafaring matters to refer to any record of progress created out of periodic entries.

Around the turn of the millennium, keepers of journals on the World Wide Web began to shorten the term “Web log” to “blog,” and to refer to the activity of keeping a blog as “blogging.” The common term referring to a single entry in a blog is “post” (short for “posting”). But “post” is also a verb: you post an entry to your blog. Amidst all this overlapping terminology many confused people have begun to refer to the individual entries as “blogs,” writing “I made a new blog today” when they mean “I put a new post on my blog today.”

As of September 30th in the anti-meridian: the page could not be found on your publishers website.

Thank you for pointing that out. I, too, was having problems for a while, but it seems to have fixed itself now. Others please let me know if this is a problem for you: tsumner (at) fbeedle (dot) com.