Taking the Hyper Out of Link:
The Important Work of Bringing the Internet to Print

Last April I read a post on Tomdipatch.com--Mike Davis’s history of the car bomb, “The Poor Man’s Air Force”--and then, few weeks ago, I read it for the first time.

As the great Krugman might say: What do I mean by that? I just mean that when I read the original post--as with much of my online, onscreen reading--I pretty much raced through it. It had been linked from somewhere else, another piece I undoubtedly raced through to get the gist of. It was all my loss. Don’t ask me what I was reading that took me to Davis’s piece, and don’t ask me why I would have forgotten the Davis post were it not featured in Harper’s, where I read it--really read it--for the first time. I’m sure that when the Harper’s editors saw fit to bring this online post to a wider audience, they likely did not imagine the wider audience would include some who had actually read through it before, but there I was--a first-time reader already familiar with the material.

Davis’s work in this and the follow-up post (“Car Bombs with Wings”) is so good I almost wish I were writing about his insights and masterful historical perspective instead of this other thing I’m on about: the important work of bringing good material originally published on the Internet to print.

You may know this one--you get into reading something on the Internet, find a link you cannot resist clicking, go read that post, then inevitably find more links there to click. Like the childhood game of telephone where a message morphs slightly with each transmitted and received whisper, it does not take long to find yourself far from your original topic. It’s very active, interesting, and lively reading.

But--maybe it’s just me--I get left with a lot of gist from this kind of reading, not a lot of ruminating over the deep thinking of these online authors.

Or maybe it’s not just me--a few others have looked into the idea that reading print beats reading off the screen. P. Karen Murphy at Ohio State actually studied this very thing and found--pardon my aplomb-- material in print is easier to understand and more persuasive than material onscreen. That’s for the same material in the same format with the same graphics. In other words, print adds literal and figurative weight. Over at Carnegie Mellon, James Longhurst agreed.

Don’t get me wrong--I have no desire to curtail any of this online publishing activity. I’m on record as a hale advocate of this grand writing project we’re witnessing. I’m just saying that moving some of this great material into print is a necessary step in the process. 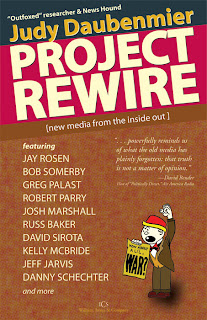 A couple of years ago I decided I might try doing something about this situation. Some background: I was working as a computer-science textbook editor and wondering if there wasn’t some little thing I could do to help all these great writers who were publishing on the web get wider recognition (and, I suppose, do something that may use my position in publishing to help move this country in a different direction).

I began looking at the web entirely differently, not just accepting its existing state, but as a giant editing project. Sure, 99.99% or more of what goes up on the web needs no more than one read-through, if that, but if Technorati’s numbers are right, there are over 55 million blogs churning out material. Let’s be conservative and say they’re posting once a week on average--using the theory that .01 percent of those posts are good enough to merit further consideration, that would make 5500 posts a week deserving closer attention. Let’s be yet more restrained and just pick about one percent of that figure: 55 great posts a week, close to 250 a month, nearly 3000 a year as an extremely conservative number. And that’s just the blogs, not all the other great Internet sources. Ever think you may be missing something?

I started a little set of books called The Informed Citizen Series (bloggers being the Internet’s informed, and informing, citizens) and signed a few notable bloggers to go about collecting good material worthy of reprinting, set in the context of a broader story, with an introductory essay by the blogger. I made a prototype for the series, Untidy: The Blogs on Rumsfeld, and Athenae of First Draft (Allison Hantschel) did a collection of material on Douglas Feith’s Office of Special Plans, where intelligence was cooked to justify the Iraq War. Just now there is a third book in this series, Project Rewire: New Media from the Inside Out, by Judy Daubenmier, one of the researchers for Outfoxed who blogs at The News Hounds. 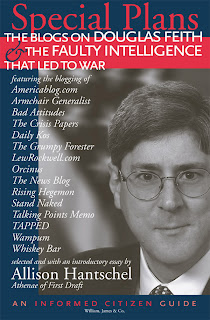 I agree with Jennifer Nix and Glenn Greenwald about the importance of success for progressive books and other products. As Greenwald put it:

The Right long ago realized that the economic success of its political products translates into all sorts of critical benefits--from creating the perception that its ideas are popular and credible to ensuring its advocates widespread media access. That's why they expend so much effort to ensure the success of their books--even going so far as to have organizations purchase them in large bulk and then sell them at a huge loss--and it's also why it is so important to them to disparage the economic viability of liberal media projects. For better or worse, the impact which a political product can have is a function of its economic viability.

I would add to the mix the New Politics Institute report by Chris Bowers and Matt Stoller, emphasizing the dominance of progressive voices in the blogosphere. It is beyond worthwhile to bring some of what is produced on the Internet into print; it is a logical next step for growing what has taken place on the Internet--what Jerome Armstrong and Markos Moulitsas call the Netroots--into something more pervasive, something that penetrates the consciousness of not just those of us who have been paying attention. 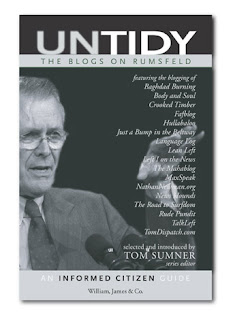 The success of progressive Internet media is not a question of triumphalism, as it has at times been framed in the past (usually with a cautionary word to avoid it); it’s really a matter of pervasiveness. In the time I’ve been working on bringing Internet content into print, from Barbara O’Brien’s great book on political blogs on through, I’ve seen increasing acceptance for the practice. Riverbend’s Baghdad Burning: Girl Blog from Iraq was highly acclaimed and successful enough to warrant a sequel. With Crashing the Gate, Armstrong and Moulitsas thrived as they branched out from their roots on the net and into print. Other efforts to create the handy bedside edition of the progressive web include Sweet Jesus, I Hate Bill O'Reilly, The Progressives' Handbook (volumes 1 and 2!) by Heather Wokusch, and Wait! Don’t Move to Canada by Bill Scher of Liberal Oasis. Greenwald’s book--not an assemblage of blog posts, but a coherent fleshing out of material originally published on his site--is the obvious huge success story, having shot to the number one slot on Amazon when announced, then showing up on The New York Times bestseller list. Other successes are coming down the pike: Jane Hamsher of firedoglake will launch a new publishing venture, FDL Books, with a book on the Plame Affair by Marcy Wheeler (emptywheel of The Next Hurrah). 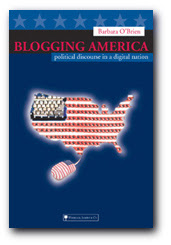 The Informed Citizen Series attempts to do something a little different: we set out to collect material from the Internet, mainly from blog posts, and string it together as a chorus of voices to develop a story fully. We look for material that works together with a good balance of overlap and fresh perspective. I like to think of it as springing from a democratic, inclusive impulse, but it just as likely springs from a desire to make order from my admittedly chaotic onscreen reading habits, from a desire to get the Internet to just sit still and get read--no ads, no animation, just words on a page.

A genre that includes writers like digby, emptywheel, Billmon, Athenae, Michael Berube, P.Z. Myers, Chris Clarke, Glenn Greenwald, Bob Somerby, Riverbend, the scribes at Sadly, No! and Fafblog!, Barbara O’Brien, Michael Shaw, and literally countless others is a pretty damn good genre. Mike Davis called his posts on the history of the car bomb “a preliminary sketch for a book-length study.” In the case of the best Internet writing, it’s a matter of one man’s preliminary sketch is another’s masterpiece. Lacking word-count requirements, corporate ownership and an editorial board that goes with it, advertiser concerns or censorship, Internet journalists and bloggers live and die by the flash of brilliance screaming for more attention. I say we give it to them.