I was reading Paul Brians' account of the history of vise and vice, as told by the OED, and I could not help but remember, for better or worse, an unusual encounter I had with the vise/vice spellings when I was editing the collection of Language Log entries, Far from the Madding Gerund . . .

The final piece of that book was the Introduction written primarily by Geoffrey Pullum, the co-author of the book (in fact, though Mark Liberman is the founder of Language Log and was listed as the first author of the book, it was Geoff who worked most attentively on the book version). I remember struggling with this sentence:


It concentrates primarily on topics having to do with grammar and correctness in Standard English—how people use the language, evidence that a lot of usage criticism is flat wrong, speculations on why incorrectly framed or completely mythical rules have such a vice-like grip on the minds of educated Americans, and so on. [emphasis added]

You, no doubt, will focus on that "vice-like"—shouldn't that be "vise-like"? I thought so, too, until I consulted the Random House Dictionary of the English Language (Unabridged) at the office here. It told me that "vice" was a spelling of "vise," so (I thought to myself) don't automatically make that change. Best to query the author. Here is photo evidence (note the straightforward manner of the entry: "vice"="vise" with no "esp. British" restrictions on it, and yes, this is an American publication): 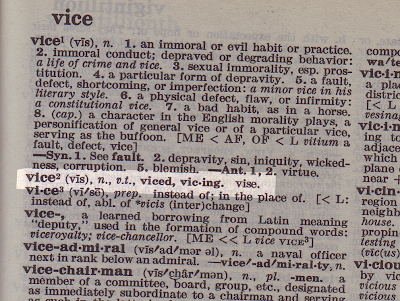 Trouble is (or, I guess . . . trouble was), the author was away in Spain, and not Madrid or Barcelona or some other reasonable location. Far away in Spain, out in the Spanish Boonies. Far, far away. "Incommunicado," I think is how they put it. I, under tight deadline, had to make an Editorial Decision.

"No problemo," as they [don't actually] say. I'll just go into the mind of Geoff Pullum, whom I had worked with enough to know things such as he would say that only fools fret over "who" and "whom" in sentences such as this one. He is not just an authoritative English grammarian, he is also a sophisticated and witty prose stylist. He excels at the self-referential sentence that is not too subtle. He enjoys bringing you in on a joke, and so I reasoned something like this:


Here is Geoff using a variant spelling of "vise" in a sentence that discusses the folly of would-be usage police. He is daring anyone to challenge the spelling, daring the reader to consult the dictionary and see that, in fact, even a dictionary editor would agree that "vice" is actually an acceptable spelling for "vise."

Pretty clever, I thought, and let it go at that. Let's leave the spelling as is. So far, so good.

But then . . . within a few months of the book's publication, I received this note from a reader:

Yesterday a birthday box arrived from my firstborn son and fellow linguaphile. In it I found a copy of Far from the Madding Gerund and a box of Godiva chocolates. What bliss! I dipped into both with gusto, beginning with a chocolate cream and the Preface. In the second paragraph I chewed happily while scratching my head in puzzlement. Was I in the "vice-like grip" of a pun or a slip of the homonym. Hmmm. Yum. If you'll reply, I'll send you a chocolate with a G on top! (I'm enjoying the book enormously.)
Hopefully, (and I hope I'm using that word properly),
DEVOTED READER

OK--the name of the reader was not "Devoted Reader." There was a real name involved, but I am respecting the privacy of the reader correspondent.

Naturally, I wrote back with the explanation I outlined above: "vice" is an acceptable replacement for "vise." I was strident, but my reply was not entirely without wit, and I invited the reader to contact Geoff Pullum, who had long since returned to civilization from the far reaches of rural Spain, directly for confirmation on this.

The reader dutifully did follow up with Geoff. Came the reply:


"Vise" is one of the Americanisms of spelling that I have not internalized, despite having been an American since 1987.  I do fine with "color" and "center" and "Americanize" and "aluminum", and even vary the spellings according to my audience ("colour" and "centre" and "Americanise" and "aluminium" for British correspondents); but "vise", and above all the single "l" in words like "labeling", tend to slip by me.

MADDING GERUND is strictly supposed to be in American spelling, so you were right to pick on it.  I'd like to blame our editor, Tom Sumner, if that's all right?

So ouch. Mea culpa. But what about that Random House dictionary? What was going on there? Indeed, I went home that night and consulted the Webster's I used in college. Right there in front of me was the distinction "Chiefly Brit." next to the "vice" spelling when "vise" is standard in American spelling. My heart sank. I had been let down by the hefty Random House Dictionary of the English Language (Unabridged).

There was a very happy ending for me, however. The Devoted Reader found the exchange so interesting that she sent me a copy of a really delightful children's book that had been written by her mother-in-law.

There is a lesson here for copy editors everywhere. When you start trying to outthink the room, you'd better start with at least two dictionaries in hand. If you're really lucky, one of them will be the OED, for reasons Paul Brians explained in his recent post here.
Posted by Tom at 27.4.11

How many angels can dance on the head of a pin? Please advice. DBlair