A Melange of Soup and Scones


The name is the fanciest thing about this summertime soup, and you don’t even say it the fanciest way. Vee-she-swah, the pronunciation that’s most divorced from actual letters—usually the way to go when it comes to French—is, in this case, incorrect. It’s vee-she-swazz, an even more hilarious hey-I’m-wearing-a-beret mouthful. After I said it recently, a friend of mine pointedly went with the -swah, clearly to demonstrate the error of my ways. I just let her do her. Life’s too short for pronunciation-shaming, and summer’s way too short. Plus it’s only soup.”

She went on to explain that the recipe was actually developed in America by the French chef at the Ritz Hotel in New York.

And how is publishing this story in a Sunday magazine not “pronunciation-shaming”?

Anyway, good for her.

However, later in the magazine in an article about a home remodel its author (who shall remain nameless), states:


Chak was a little unsure, only at first, about the scones at the base of the gracefully dramatic stairway designed by Stillwell.

Owners of the Common Errors in English book may remember the charming cartoon that editor Tom Sumner captioned to illustrate my entry on this goof: 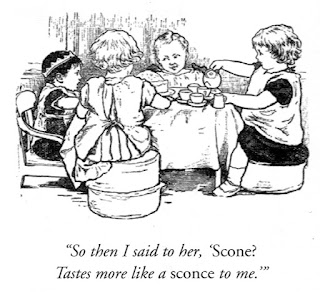 The book is worth buying for the cartoons alone, but here’s what I had to say in the associated entry:

If you fling a jam-covered biscuit at the wall and it sticks, the result may be a “wall scone”; but if you are describing a wall-mounted light fixture, the word you want is sconce.